Described by visitors as "spectacular," the Colca Canyon, Peru region
is definitely on our list of recommended destinations here at
Inside-Peru.

Although once one of the lesser-known tourist destinations in Peru, the Colca Canyon area has rapidly gained interest for its beautiful hikes and unique attractions.

Vision of Arequipa and Colca Canyon from Kosuke Haga on Vimeo.


What is Colca Peru? The Colca Canyon?

Carved by the Colca River, the Colca Canyon is the third most-visited travel destination of Peru.

It is located in the extreme north-east of the Arequipa region and can be reached in about 3-1/2 hours by road north offrom the city of Arequipa, Peru.

As recorded by GPS and stated in National Geographic, The Colca Canyon is twice as deep as the Grand Canyon in the United States.

To begin your exploration of the vast and extraordinary natural phenomena of the Colca Canyon area, you'll need a pass costing about $13.00 USD obtained from Autocolca, the regional tourism agency.

Anyone would be hard-pressed to see all there is to see on their own. So, from rafting and hiking, to birdwatching and archaeology, various Colca Treks and Tours offer the best way to see the Colca Canyon.

For those who want to take several days to appreciate the grandeur of the Colca, hostels and hotels are available.


The Three Sections of the Colca Canyon


The Colca Canyon can be divided into three basic parts:

"Cruz del Cóndor" is the shortest and the shallowest (relatively) section of the Canyon. Its depth is between 4,265 to 4,920 feet (1300-1500 meters) from the level of the river at the bottom to the lower south end of this part.

From these two vantage point, you can see into the Canyon from the very top edge.

Here, nearly every morning, you can get a close look at the majestic condors as they soar upwards on the thermal drafts.

The Cruz del Cóndor section starts at the upper end of the valley between the towns of Pinchollo on the left bank and Madrigal on the right bank and ends at the Oasis de Sangalle.

The second section extends from Sangalle to Canco.

This part of the Canyon is also spectacular but is harder to get to.

In the Part I of the Colca Canyon the river runs close to the "Cruz del Condor" but in this portion, after passing Cabanaconde, it veers away from the side of the canyon.

It is in this Part II where there are various places where you can cross the river on hanging bridges.

In that last section of Part II before reaching Canco, there is a drop in the river resulting in a waterfall called the "Cascadas de Juan Pablo II."

The third section of the Colca Canyon stretches from Canco to Andamayo.

This is actually the deepest, most impressive and at the same time most inaccessible part of the whole Canyon.

The road between Huambo and Tambillo is a long way from the edge of the Canyon. Due to the lack of a road near the top, this part of the Colca Canyon is best viewed from inside out, rafting past numerous rapids down the river.

Following the river as it descends is in fact the best way to really get the full effect of the depth of the Canyon, its gigantic proportions and the impressive coloring of its volcanic walls.

Due to the grade of difficulty of rafting the Canyon, though, this is only recommended for people with lots of experience in adventure sports.

This section of the Colca is known as the Chocolate Canyon due to the color of the water.


What is Special about Peru's Colca Canyon?

The Colca Canyon in Peru has a number of attractions.

First of all, it is the most remarkable canyon in the world. At its deepest point, the canyon falls from its rim to its floor for an incredible drop of 13,648 feet (4,160 meters).

From the "mirador" (lookout) at the Cruz del Condor (Condor Crossing) you can see condors, the world's largest bird, in full flight. The canyon at this point is a "mere" 3,960 ft (1,200 meters) deep. 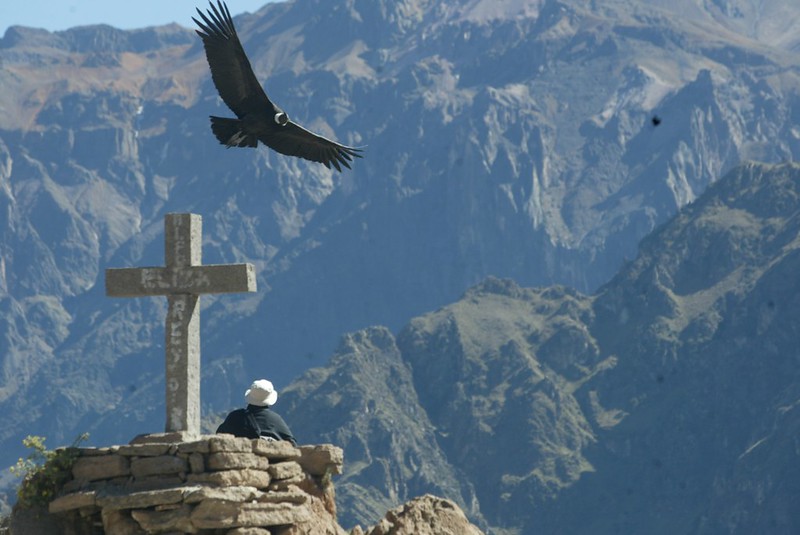 The condors catch the uprising warm drafts along the sides of the canyon, and usually can be easily seen by the visitor in early morning and late afternoon. Watching the condors at the Colca Canyon has become a new major tourist attraction in Peru.

During the your visit, you can see interesting natural landscapes as well as, llamas, alpacas, guanacos, vicuna and vizcachas.

Alpacas of the Colca Canyon

This valley developed along a fault line in the earth's crust. Erosion during the course of thousands of years by the longest river in the Peruvian coast then deepened and defined the canyon.

The only way to see the full length of the canyon is by raft or kayak. The combination of rapids and remoteness are part of what many consider one of the best river trips in the Western Hemisphere.

The highest ridges are up the permafrost region of the high Andes mountains.
The valley floor thousands of feet below is much more temperate.

There are 14 villages spread along the course of the river valley. These towns are full of life and color.

The highest ridges are up the permafrost region of the high Andes mountains.
The valley floor thousands of feet below is much more temperate.

There are 14 villages spread along the course of the river valley. These towns are full of life and color.

Don't limit yourself to the unique wonders of the Colca Canyon itself. Check out the indigenous population.

Built on the sites of the older pueblos, the current villages were established during the Colonial Period. The architecture reflects this period.

Near the head of the Colca Peru river canyon, pre-Inca terraces are still in use for agriculture. 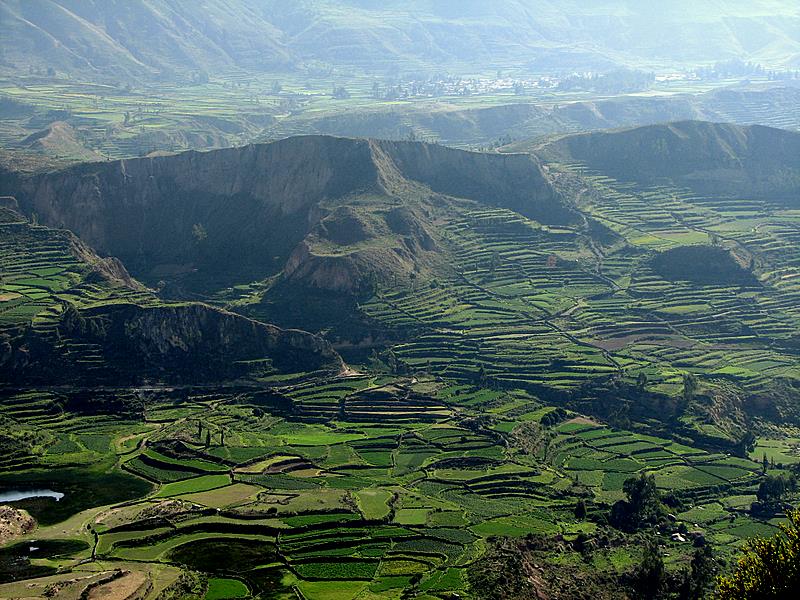 Descended from the ancient Collahua and Cabana peoples, the current inhabitants retain many of the old traditions - unique clothing, dances, legends, and customs.

In addition to the animals mentioned above, there are more than 100 species of birds and 300 species of plants in the Colca Canyon, some 32 of which are of the cactus family.

The many facets of the Colca Peru area make this region ideal for hiking, trekking, canoeing, climbing, and cycling as well as bird watching and photography.

Have your say about what you just read! Leave me a comment in the box below.
colca hotels and lodge Colca Hotels and Lodge in Chivay